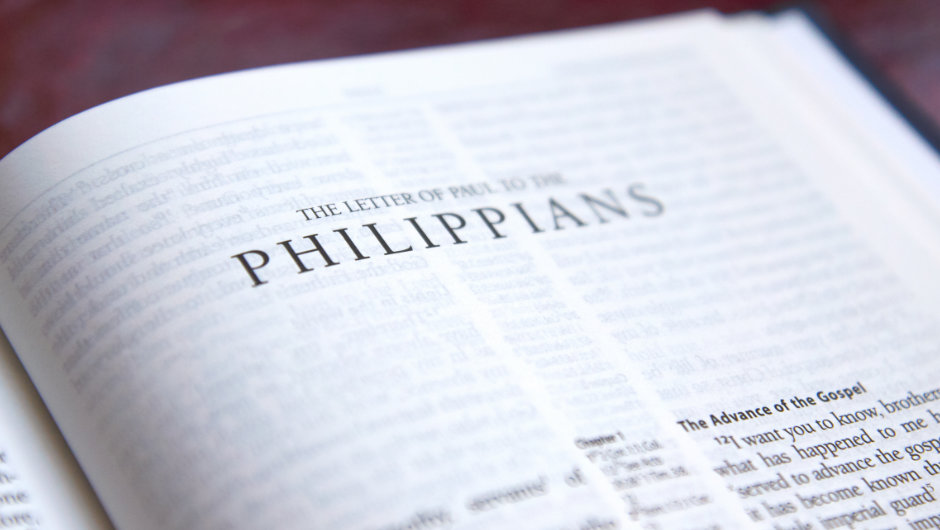 The Letter to the Philippians was written by the Apostle Paul. He had helped to start the church in Philippi on his second ‘missionary journey’ as described in the book of Acts (Acts 16:6-33).

This was the first recorded church in mainland Europe. It had a dramatic start. Around AD 49 Paul travelled with his mission team - Timothy, Silas and Luke - into Europe following God’s call. They visited Philippi, a Roman city in eastern Macedonia (modern day Greece). Although they usually first went to a synagogue to evangelise the Jewish people, there was no synagogue in Philippi. Instead, they found a group of God-fearing women who met to pray by the river. Lydia, a visiting businesswoman who responded to their message about Jesus, welcomed the team to her home.

Acts 16 tells of how their ministry to the prayer group, and others who gathered to hear Paul, was hindered by a slave girl who worked as a fortune teller. She noisily followed Paul and his team around and eventually Paul cast an evil spirit out of her. But without the spirit, she became useless to her handlers. They angrily brought Paul and Silas before the authorities who charged them with stirring up trouble, beating and imprisoning them. Undeterred, during the night Paul and Silas sang praises to God who caused an earthquake which shook the prison, opening the doors and releasing the prisoners from their chains; but Paul took command, and nobody escaped. The jailer and his family wanted to know how they could be saved. When they believed in the Lord Jesus they were baptised and added to the church. The next day the authorities exonerated Paul and Silas, escorting them out of the city.

Apparently, Timothy, Titus and Luke remained to continue the work in Philippi. It is highly probable that Paul would have visited the church at least once more, Philippi being the place from which he departed on a later journey (Acts 20:6). It is likely that the letter was written a decade after the church was planted, during Paul’s imprisonment in Rome (AD 59-61) … a period in which Ephesians, Colossians, and Philemon were also written.

The Philippians became Paul’s primary missionary supporters. Hearing of his arrest, the church sent one of their members, Epaphroditus, to him with a financial gift (4:18). Epaphroditus’ news of the Philippian church led Paul to write this letter.

A central purpose in the letter is: “… whatever happens, live worthy of the gospel ... striving together as one for the faith of the gospel without being frightened ...” (1:27-28). ‘Striving together’, as in the sense of ‘pulling together’, is a main theme of Philippians. It seems that the church in Philippi was being pulled apart from the inside by divisions and threatened from the outside by persecution. Paul is thankful for their partnership in the Gospel, and that they are preaching the same Gospel, even though others are hostile. Therefore, ‘joy in the gospel’ is a recurring theme in the letter, being mentioned 15 times.

The letter is highly relational, expressing Paul’s personal affection and concern for the church. He wanted them to be confident to persist in trusting the Lord, and proclaiming the gospel, despite suffering from persecution and potential disunity.

“Rejoice in the Lord always!” (4:4) - different forms of the words joy, rejoice, and gladness appear in 15 of the letter’s 104 verses. We can all find it tough to live as a Christian. But Paul reminds us that we have reasons to rejoice, even when we are in tough times.

Rejoice in the progress of the gospel (chapter 1)

Paul was in prison for the sake of the gospel. But he was not despondent because God was using his circumstances to spread the gospel. He encouraged the Philippians that God would also use them to advance the gospel, even through the bad things that happen. They should rejoice in the Lord because He is in control even when they did not understand what His purpose is.

Paul uses what may have been an early Christian hymn in 2:6-11 to explain how Christians should behave towards one another. It gives a description of how Jesus, God the Son, entered our world, died and is now exalted. He is our wonderful example. If He could do this for us, we should seek to serve our brothers and sisters in Christ in the same way. Paul then gives two more examples of selfless service: Timothy and Epaphroditus, two men the church knew very well. The way to unity is to be glad to give our lives to serve one another (2:1, 17-18, 29)

Rejoice that Jesus is Lord (chapter 3)

Some teachers with a Jewish background insisted that new Christians needed to keep the Jewish law, including circumcision. Although Paul had the highest Jewish credentials, he gave his testimony in chapter 3 that there is nothing more wonderful or precious as knowing Jesus, having His righteousness clothing us and His resurrection power inside us! Only Jesus can make us acceptable to God, and only He can bring us safely home - where we will be like Jesus. But having come to faith, we need to continue to work out our salvation. We have new life in Jesus, but this needs to be well nurtured by prayer, Bible reading and fellowship with other Christians and personal witness. This includes of course reading this letter.

This last chapter shows what joyful gospel-shaped living looks like. With minds and hearts settled by trusting the Lord, believers can stand firm: gently helping each other, praying about everything, being thankful in everything, being careful how to think about everything, and gladly giving to others. Paul joyfully gave thanks for the generous gift that the Philippian church had sent with Epaphroditus, and encouraged them to be joyful, however much or little they had, trusting God to provide for all that they needed.