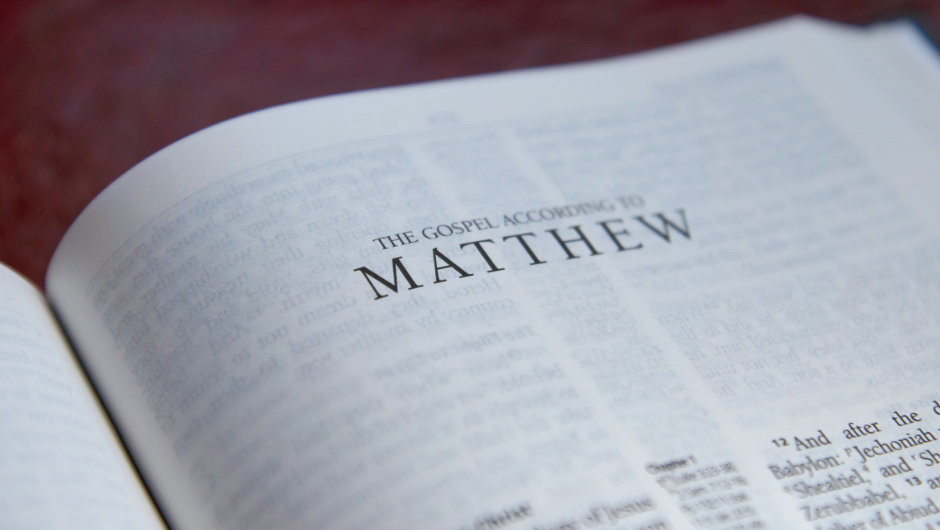 Matthew’s Gospel was unanimously accepted by the Early Church leaders as being written by Matthew, otherwise known as Levi.  He was a tax collector who Jesus called to leave his work to become one of the first disciples (9:9).  The Gospel includes coinage details that would be familiar to someone who worked with money (drachma 17:24; stater 17:25; talent 18:24, 25).

The date of the Gospel is unknown, with some favouring a date around AD 85.  However, there is good reason to believe it was written before AD 70 as the Gospel is partly aimed at Jews, but there is no mention of the destruction of Jerusalem in AD 70.  Irenaeus, one of the early church leaders, believed it was written when Peter and Paul were in Rome (around AD 60-67).

The first 16 verses of Matthew’s Gospel contain a long list of names.  These verses are the key to understanding the Gospel.  The list is split into three parts: the first starting with Abraham, the second with David and the third with the return from the exile.   God made great promises that His blessing would come through a son of Abraham, a King greater than David, to bring a future better than Israel’s.  Matthew tells us that the promised time, the promised blessing and the promised One had come.

All the Gospels focus on an aspect of Jesus’ identity.  Matthew shows Jesus to be the promised Messiah (Christ), a King directly descended from King David.  The Old Testament prophets had predicted that someone in that line would be God’s anointed leader.  The Jews looked for a king who would restore Israel to its former greatness.  At the time of Jesus, they were looking for someone to overthrow the Romans; but many were disappointed that Jesus was a man of peace who was building a Kingdom that was not of this world, but would spread throughout the world.

This Gospel is not just for Jewish readers but for Gentiles (non-Jews) as well.  Jesus gives special recognition to the Gentile believers giving them an equal place in His Kingdom.  The genealogy in chapter 1 includes two Gentiles, Rahab and Ruth; chapter 2 shows how the Gentile Magi arrived to honour His birth; the Roman centurion displayed a faith superior to any Israelite (8:5-13); the great faith of the Canaanite woman led Him to heal her daughter (15:21-28).  The Gospel ends with Jesus sending His disciples to every nation (28:19-20).

The Kingdom of Heaven

Matthew’s Gospel is all about the King and His Kingdom.  Matthew also refers to the kingdom of God as the kingdom of heaven 32 times.  The Gospel shows the nature of God’s Kingdom under Christ the King.

The Gospel is carefully arranged: there are five teaching sections with the same closing words at the end of each (7:28; 11:1; 13:53; 19:1; 26:1).  The law in the Old Testament is written in the first five books of the Bible and some think Matthew followed this structure.

The best known section is the first, known as the Sermon on the Mount, in chapters 5 to 7.   It reveals how God wants people to live in His kingdom by the power of the Holy Spirit.

Matthew’s Gospel was probably written to convince non-believing Jews that Jesus is their promised Messiah, and to help Jewish converts to be reassured that following Jesus is consistent with Old Testament prophecies and therefore the purposes of God.  These Jewish converts may have been persecuted and tempted to give up their faith.  The Gospel is also to be valued by Gentiles; as we have seen, the Great Commission (28:18-20) explains why the apostles took the Gospel beyond Israel to the Gentiles.

Many people today fail to understand how uniquely great Jesus is.  This Gospel reminds us that, centuries before Jesus came, God inspired people to write prophetically about Jesus so that when He came to earth He would be recognised as the Messiah who fulfilled God’s promised plan of salvation.  Jesus calls people to enter His kingdom by believing in Him.  Many of His parables show the greatness of His kingly authority.  In the last verses of the Gospel (28:18f) Jesus instructs His disciples to teach future believers to obey everything that He had commanded them.

All of the Bible is God’s Word