Let's Rethink ... The reality of being a burden 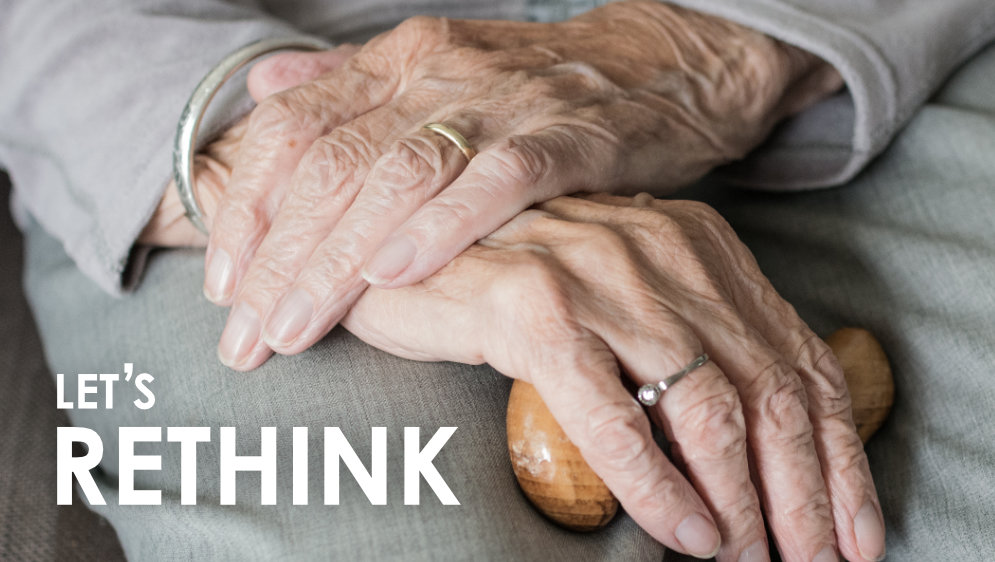 What will you be like in your old age?  Strong to the end, or progressively failing in body or mind?  Happy or sad, loved or ignored?

Perhaps old age has become the new taboo topic.  We can make jokes about Zimmer frames and stair lifts, and use euphemisms like ‘senior moments’ to describe memory loss.  But we fight shy of too much detail and most families come to critical life choices largely unprepared.

It was not always so.  A closer knit family structure, even up to World War 2, assumed that the elderly, disabled and long term invalids would be cared for in the family.  Indeed, one child would often assume that that would be their role in the family to look after their poorly siblings, parents and other relatives.  The role gave dignity to the unmarried offspring, and comfort to those who were less able.

It was a world in which responsibilities came before rights, and duty of care to others had priority over personal ambition.

Things are rather different now.  With increased mobility, the welfare state, children leaving home before marriage, the pressure of fast moving careers and increasing godlessness; personal rights have moved to the front of the agenda.

Instead of children growing up with ailing grandparents and other relatives, the senior generation are encouraged to progressively downsize at a distance until they see out their days in residential ‘care’ where they will not interrupt their children’s lifestyle too much.

Independence seems to be valued at every age: from the child who now has inadequate parental guidance, to single people who have inadequate real social networks, to the elderly who are expected to ’keep going under their own steam’ as long as possible.

And in one way that is right.  We want to encourage responsibility so that people can feel competent and confident in how they live.  But the down-side of this is that none of us is able to be totally self-sufficient, because we are not God.  Even in Eden we were not designed to be totally independent; still less now that sin’s curse limits our life.  But Satan still lies, saying we can be like God.

Living in a sin-scarred body, amongst sinful people, on a sin-scarred world, but relating to a holy God is a paradox.  To quote Tozer  “The Christian soon learns … that he may be safe when he puts himself in jeopardy; he loses his life to save it and is in danger of losing it if he attempts to preserve it.  He goes down to get up.  if he refuses to go down he is already down, but when he starts down he is on his way up.  He is strongest when he is weakest, and weakest when he is strong …” (from That Incredible Christian)

Despite secular attempts to make man into his own god, to describe Christian faith as a religious crutch, assuming that the evolution of science will eventually bring in Utopia - the Bible says that human beings are weak, decaying,  mortal and dependent individuals.

But then, is that not the culture through which we bring our children?  A world where expensive toys substitute for quality time and virtual social networking takes the place of real relationships.

The Bible is clear: Carry each other's burdens, and in this way you will fulfil the law of Christ. (Galatians 6:2 )   Each one should test his own actions. Then he can take pride in himself, without comparing himself to somebody else,  for each one should carry his own load. (Galatians 6:4-5)   We are each responsible for our own actions: it is our duty to carry our own load in as far as we are able.  But when we are not able to carry our load, God expects that others will carry the excess burden.

While a functionalised view of the human body may assume that the ’burden’ relates to feeding, body care and mental stimulus; there is a significant relational element to bearing people’s burdens.  Words like love, understanding, sympathy, empathy, and compassion are not programmable mechanical functions.  They express hearts that are bound together in love.  That is what a family is supposed to be.  It is also a definition of the church of Jesus Christ.

We are now on the cusp of a new wave of depersonalisation of the vulnerable.  Euthanasia is again being debated as the means of relieving society of the burden of the aged (along with a huge financial saving). Old people are feeling pressurised not to be a burden, and seem to passively conspire with the view that as they are economically unprofitable, they therefore have no value.

So, paradoxically, we need to accept that each one of us is a burden!  We were a burden from before we were born.  We will continue to be a burden until we die.  While there is much we can do to help ourselves and to serve others; at the end of the day, we are weak and dependent.

Christians believe that Jesus Christ sacrificed himself when he accepted the burden of our sin.  We also need the humility to accept help when we are incapable, and love from those who genuinely care for us.  They are willing to sacrifice their own lives for others.  This is not to demand that others respond to our orders, but graciously to accept what is given in love.

Being a burden is not a shameful state but the honest reality of all of our lives.  The state or bank may provide some money but without genuine love no burden is properly carried and no duty of care is properly discharged.  Such love is always costly but it is the only kind of love which is fit for purpose.