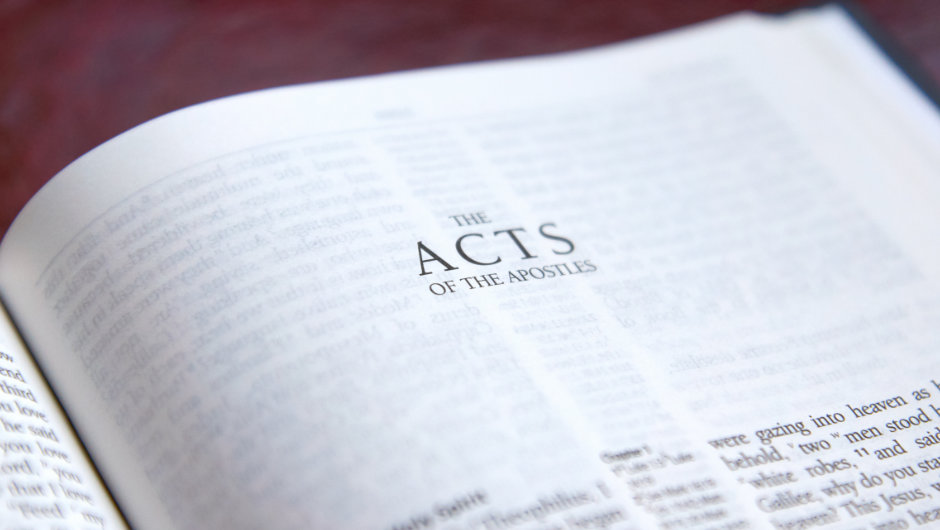 Acts was written by Luke, a medical doctor and probably the only non-Jew to write any of the New Testament books. Luke had never met Jesus but was a close associate of Paul and often travelled with him, as indicated by the use of the word ‘we’ (16:10-15, 20:6-21:26). Luke also wrote his Gospel to describe the life and ministry of Jesus, from which Acts continues to describe the beginnings of the Early Church.

The book is often known as The Acts of the Apostles because it tells how the apostles took the message of the good news of Jesus across the Roman world. However, the opening verses make clear that it is really the second part of the Acts of Jesus. Luke begins “In my former book, Theophilus, I wrote about all that Jesus began to do and to teach until the day he was taken up to heaven…” In Acts Luke tells of what Jesus continued to do and teach through the apostles in the power of the Holy Spirit.

It focuses on some of the stories of Peter and Paul, but also mentions a few incidents involving other key leaders: James, who was one of the apostles, Stephen, Philip, and James the half-brother of Jesus who was a key leader in the Jerusalem church. It explains how the good news was preached, miracles were seen, and churches came to be planted. It also shows how the gospel was opposed by both Jews and Gentiles and how some, notably Stephen, lost their lives because of the gospel. It covers a period of around 28 years. The first 20 chapters cover 24 years; the last eight cover just four.

Acts 1:8 is a key verse. Jesus says that His followers would be His ‘witnesses’ in Jerusalem, Judea, Samaria and the ends of the earth - and the book can be roughly divided into how the church grew in those areas: Jerusalem (chapters 1-7), Judea and Samaria (8-10), and to the ends of the earth (11-28), including Rome itself. Indeed, one helpful reminder of the structure is to remember 1:8 and then 8:1. In 1:8 Jesus tells His Apostles to go beyond Jerusalem. In 8:1 we find that through suffering Jesus compels them to go beyond Jerusalem with the good news.

More simply, you can see the book as largely focusing on two of the apostles, Peter (chapters 1-12) and Paul (chapters 13-28).

Acts was probably written in the early 60s AD, for reasons we will look at when we consider the purpose.

At the start of the book, Luke says he is writing to Theophilus, probably a Roman official. Its content has led some to believe that it would serve as a brief for a lawyer, maybe Theophilus himself, to represent the Apostle Paul who was awaiting trial in Rome. This would account for the lengthy description of Paul’s journey to Rome to stand trial. Luke emphasised that Paul was an honourable man who was eager to go to Rome and did not escape from his guards even when he had the opportunity. Luke was showing that the Christian faith was not essentially a threat to Rome.

Luke parallels the stories of Peter and Paul. The last mention of Peter is of his release from prison (chapter 12) to preach the gospel. Could Luke be asking Theophilus to ensure the same treatment for Paul? Acts ends with Paul under house arrest, and yet freely proclaiming the good news. Luke is reminding his readers that no matter what our situation, God’s agenda for His church is still the same.

It seems likely that Paul was executed under Nero’s jurisdiction around AD 65-67. This, of course suggests that Luke’s Gospel was penned at least slightly earlier than this.

Luke wanted to show how the work of Jesus (begun in Luke’s Gospel) continued by His Spirit in Acts, with the gospel preached, miracles performed, and churches planted. The sermons of Acts give us an insight into how the message of Jesus was preached differently to Jewish and Gentile audiences. Acts 17 contains Paul’s sermon outline in Athens where he talks about God in more general terms, but with no mention of the Old Testament which would not be known by the Gentile people of Athens.

The birth of the church is amazing. Some of the things that happened were special for that time, but many continue today. When we share the good news of Jesus, we too can find that people respond with faith. When we pray for people, God acts.

The church will grow through persecution

God’s work through the church has always had opposition. That is no excuse for giving up or thinking that what we are doing is wrong. The apostles faced opposition and we will too. In some cases, God intervened as with Peter and Paul. In other cases, He did not as with James and Stephen. However, God always uses the opposition to spread the gospel to the most unlikely people in the most unexpected places (chapters 8, 16 and 24-28).

The gospel means change, but that is not easy

Jesus told the apostles to take the good news to all the world, but many stayed in Jerusalem. It was persecution that eventually led many to leave. It is interesting that one of the persecutors was Paul who later became a convert who helped the church to spread even further. The message of the gospel focuses on the good news that Jesus is risen and welcomes all people everywhere to believe in Him. But the apostles made sure that their audience could understand the message by explaining it in ways they can understand. We are wise to do the same.

To reassure us that the gospel is God’s work