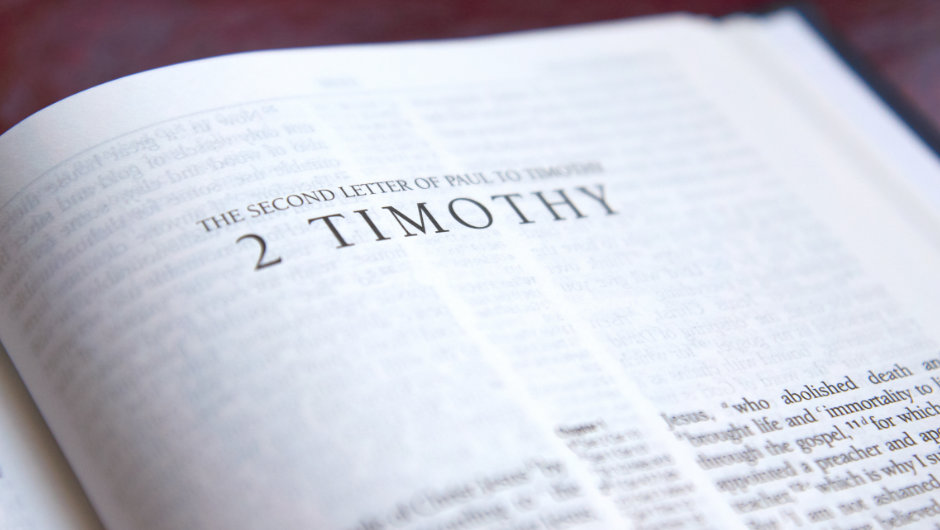 This is the last letter that Paul wrote when he was in prison in Rome, prior to his execution at the hands of Nero, the Roman Emperor. It may have been dictated to Luke who was Paul’s only remaining ministry companion (4:11).

This is the second letter to Timothy, who was Paul’s trusted special envoy to the churches. Timothy had joined Paul on his second missionary journey (Acts 16:2), having become a believer in his home city of Lystra in modern day Turkey, probably when Paul had preached there. His mother was a Jewess, his father a Greek, and he had been brought up to know the Scriptures (3:14-16). Timothy was with Paul toward the end of the Apostle’s first imprisonment in Rome (Philippians 2:19-24).

They travelled to Macedonia (Philippians 2:24), stopping in Ephesus on the way. But they discovered false teachers had apparently taken over the church. Paul had predicted this (Acts 20:29-30). So, he left Timothy to deal with those who were leaders but preaching a false message (1 Timothy 1:3-4). Paul instructed that two of those men, Hymenaeus and Alexander, must leave the church (1 Timothy 1:19-20).

After being in Philippi, and Corinth (4:20), Paul apparently spent the winter at Nicopolis (Titus 3:12). After the winter of AD 63-64, it seems that Paul tried to return to Ephesus by going though Troas. But he was re-arrested. It is possible that Paul had been captured because of Alexander the metalworker (4:13-14), who had been asked to leave the church of Ephesus because of his false teaching.

It was a very tough and lonely time for the Apostle. He was in chains, and in a cold dungeon. Paul only had Luke with him (4:11) and wanted Timothy to join him in Rome (1:4; 4:9, 21) ‘before winter’, bringing parchments and a cloak. He wanted to encourage Timothy to stand firm in the Gospel, for which Paul knew he would soon die.

The letter was written shortly before his death. We do not know that date for certain; sometime between AD 64 and 67 has been suggested.

The letter expresses Paul’s personal emotions of suffering through persecution and desertion by once-trusted co-workers, but also his confidence in the Lord. Against that background he invited Timothy to visit him, but reminded the younger man to stand firm in the faith too. Preaching the Gospel had led to Paul’s imprisonment and likely death, but Timothy must not be deterred from boldly preaching the truth despite the risks. He may well have needed that instruction because Hebrews 13:23 says that Timothy was himself imprisoned at some point. This letter teaches Christians to expect suffering (1:8, 2:8, 3:12, 4:5) and be willing to suffer to honour Jesus who suffered for us and who will bring His faithful people safely home (4:18).

The letter tells us that all those who want to live a godly life will suffer persecution in one way or another (3:12). We must stay faithful to our calling when it comes like Paul, and as he exhorts his young friend.

Timothy needed to be unashamed to proclaim the Gospel, defend it, and ensure that he did not change it or move from it (1:8-13). There is no substitute for reading and re-reading Scripture so that we can be sure of the faith we profess (3:10-17).

It is not enough to know the truth; we must live it out! Bad teaching will lead to bad behaviour, and it spreads like a disease (2:14-19). Good teaching should lead to pure, kind, useful words and deeds (2:20-26). It can be very hard to live a godly life in an ungodly world, but God is with us and He will help us. It could be costly for Timothy to visit Paul in prison with a looming death sentence (4:9-22).

Truth matters to the end

Paul did not change his message when it was unpopular, even when facing execution. Instead, he urged his young friend to join him in suffering (4:1-8). That was the way of Jesus, who was also deserted by His close friends. Paul described his ministry like a race (4:7) which he was determined to finish well.