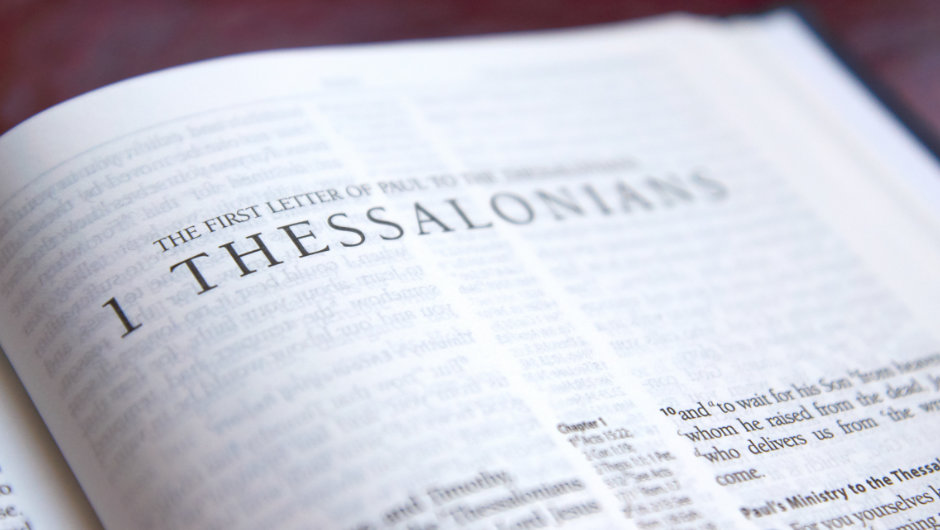 Paul and Silas visited Thessalonica in the autumn of AD 49, on Paul’s second missionary journey after establishing a church in Philippi. Having travelled through Amphipolis and Apollonia, Luke tells us of Paul’s short but significant stay in Thessalonica in Acts 17:1-9. Thessalonica was a seaport city, a key communication and trade centre. It was the largest city in Macedonia, the capital of its province on the important east-west Egnatia Way trade route.

Paul preached at the synagogue on three Sabbaths and spent as much time as possible with those who believed in Jesus (2:7-12). A number in Thessalonica believed Paul’s message: some Jews, and many God-fearing’ Greeks, and some prominent women (Acts 17:4; 17:12).

When he preached the third time, his Jewish opponents started a riot (Acts 17:5) because Paul was making many converts. They said that Paul and Silas were claiming that there was another king besides Caesar (Acts 17:7). This was a concern to the local people because Thessalonica valued its position as a city allowed to govern itself under Roman rule. If the Romans heard that its people were valuing another king, there could be trouble.

It seems that the Christians met in Jason’s home and so the mob rushed there to get Paul and Silas, but they could not find them. Jason was arrested and put on bail, but Paul and Silas left the city at night.

Paul was very concerned about the new Christians in Thessalonica, and was glad to get news from his co-worker Timothy (3:1-6). It was probably soon after the visit, maybe AD 50, that Paul wrote to the persecuted Thessalonians to encourage and instruct them, and answer some of their questions.

After his speedy exit, Paul explained why he left the city so suddenly, and to clear up any confusion about his motives. He wanted them to know of his joy that they were progressing well as Christians.
Many other churches in the region spoke warmly of how they had so clearly started following Jesus.

In particular, Paul needed to clear up misunderstanding about the return of Jesus. Some of the Thessalonians had died. The church was confused about what happens to believers who die before Jesus returns. The Thessalonians believed that would be very soon, and many had stopped working and had become dependent on others. Paul explained that we do not know when the return of Jesus will be, and that Christians need to continue in their normal lives.

In this letter we see encouraging examples of genuine faith, love and hope.

In chapter 1 Paul reminds the Thessalonians of their response to the gospel when Paul came to them. He said that their faith had become a model (1:7-8). They demonstrated genuine faith as described in 1:9-10. Having true faith is about turning to God from idols (any thing, person, or idea that is given first place in our lives other than Jesus), believing that Jesus is God’s Son, risen from the dead, and trusting that Jesus will save us from Hell when He returns. Genuine faith welcomes the gospel of Jesus with joy even though turning to God is costly (1:5-6). True faith keeps going even when it is hard (2:6-10).

Do not lead without love

Paul reassures the Thessalonians that his short visit and sudden exit was not because of a lack of love for them. Paul reminded them of the risk he took in coming to them (2:1-2, 13-16), the way he lived while he was there (2:3-12) and shares his longing for them since he left (2:17-3:13). He loved them as a parent, and his heart was broken when he left them. Gospel leadership is motivated by genuinely sacrificial, thoughtful and caring love. The model for church leaders that Paul sets out here is not about power and money.

Do not let money get in the way

Paul made sure he carried on his trade of tent-making so he could earn money to support his ministry. That way no one could claim that he was preaching to get an income. The Gospel should always be offered free of charge. It is right in certain circumstances to financially support those who serve the church and the cause of the Gospel, but ministry should not be withheld because money is an issue.

Do not be alarmed about death and the future

Paul wrote that Jesus Christ will visibly return to the earth again, to bring salvation and judgement. This should shape the way we live now. In chapters 4 and 5 Paul corrected a misunderstanding about the return of Jesus. Christians who die before He returns have not missed out! (4:13-5:5). Even though the death of Christians will make us sad as we miss them, those who die in Christ are much better off. The letter reminds us of the glorious reunion when Christ returns.