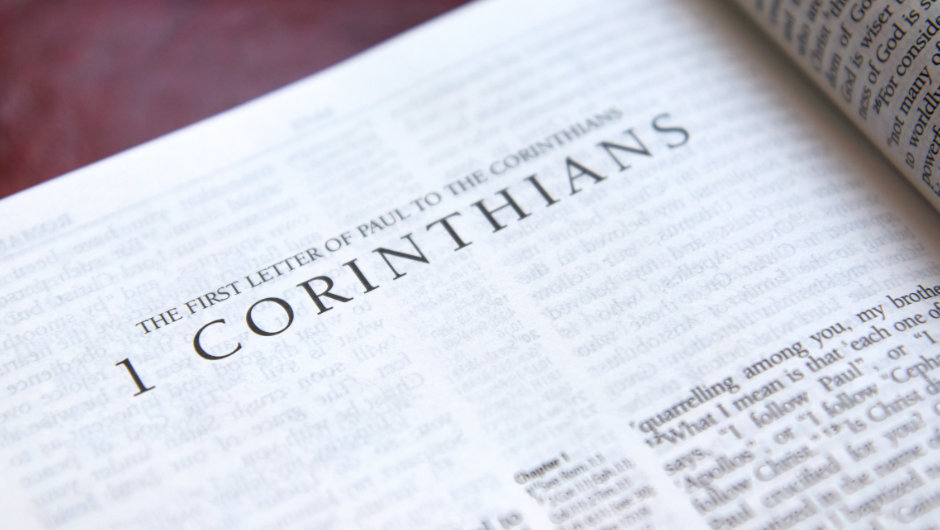 Corinth was an international city. In the first century it had two seaports, one each on the north and south of the isthmus. Many different nationalities visited and lived there. It was a wealthy city where the famous Isthmian games (like the Olympics) were held. Worship in the pagan temples encouraged immorality as part of the culture. The city had a reputation for encouraging people to live for pleasure and behave as they wanted.

Paul knew the Corinthian church well. It was one of the churches he founded and remained with over a period. According to Acts 18:11 he was there for over 18 months, probably in AD 50-51. It is likely that Paul left Corinth in the autumn of AD 51. Three years later while he was in Ephesus there must have been contact between the Corinthian church and Paul, because in 1 Corinthians 5:9 he speaks of the Corinthians’ misunderstanding his previous letter. This means there was a letter before 1 Corinthians which we don’t have. In 1 Corinthians 1:11 Paul also speaks of reports from Chloe’s household. Chloe was probably a significant lady in the church; members of her family/household had visited or written to Paul informing him that the church was disunited. Paul wrote this letter to deal with the problems in the church and to address other issues which they had asked him about (7:1).

There are several reasons for the letter. Paul loved the church and was very concerned to hear about the problems and misunderstandings, and wanted to answer their questions. In the first four chapters Paul deals with the problem of divisions in the church which had been caused by some ungodly leaders. Paul needed to defend his own role as an apostle and argue against his opponents, who were critical of his preaching. In chapters 5-6 he further addressed their misunderstanding about sex and holiness which he had written about in a previous letter (1 Corinthians 5:9).

Chapter 7 begins ‘now concerning the matters about which you wrote …’ indicating that Paul was also responding to issues raised by the congregation. Apparently, a group of believers (including Stephanas, Fortunatas, and Achaicus (16:17)) brought questions in the form of a letter. In 7:1, 7:25; 8:1; 12:1; 15:1 and 16:1 Paul dealt with those issues. The subjects concern relationships and sex, unmarried women, food offered to idols, spiritual gifts, the gospel, and collecting money.

In particular it would seem that the Corinthian believers, coming from a pagan background were worshipping in ways that were wrong and needed to be corrected. Paul’s famous chapter 13 on love, comes as he urged those who were clashing over spiritual gifts, and in particular tongues and prophecy, to learn to seek the good of one another.

The letter explains why our attitude to leaders is important. Do not idolize them but respect their hard work and value those who live and teach according to the Gospel of Jesus. Paul contrasts worldly leaders and Christ-like leaders. The message of the cross speaks of the humility of Jesus which sets an example for us (1:18-2:5). Paul explains what true apostles are like (chapter 4) because some false apostles had caused problems and divisions in Corinth. That is especially important for the sake of others who are starting to put their trust in Jesus.

Paul affirms God’s command that sexual activity should only be within a marriage between one man and one woman. In chapters 5-6 Paul tells them how to deal with those who claim to be Christians but live immoral lives. Pain comes to us and others when we stray from God’s design. Some people in the church thought Christians were free to have sex outside marriage (as in the pagan temples). Other people in the church taught that all sex (even in marriage) was a bad thing. In chapter 7 Paul writes about sex, marriage, singleness, and divorce - to correct their views.

Do not divide the church

The church at Corinth was divided about whose leadership they should follow. They were proud and used to show off and argue when the church met together. Christians were disagreeing over matters that were not central to the Gospel; and so Paul urged them to keep the main things about Jesus’ life, death and resurrection central (15:3) – this is true for us today.

Take care how you worship

We have a wonderful freedom as followers of Jesus. But this does not mean that we can worship in any way we like. God gives us wise principles to make sure that when we meet together, we honour him and each other. In Corinth, they dishonoured God with meetings that were self-serving and ignored the needs of others, especially the poor (chapter 11). They lived as if they did not need Jesus and did not need each other (chapter 12). Chapter 13 teaches how love is so important if a church is to be united and honouring to Jesus. We make our contributions to be a blessing to others, not to serve ourselves. We go to church for the good of others and not to show off how great we are.